As you know I’ve been posting little 5 question interviews with artist and writers in the US comics industry this past year or so, trying to promote some talent you may not have seen and learn from other pros. At Comic Con in San Diego I met two gifted gentlemen who were really fast to reply, but it has taken me forever to publish the interviews – Sorry about that!

Anyway, alphabetically, here’s the first of the two interviews.
—- 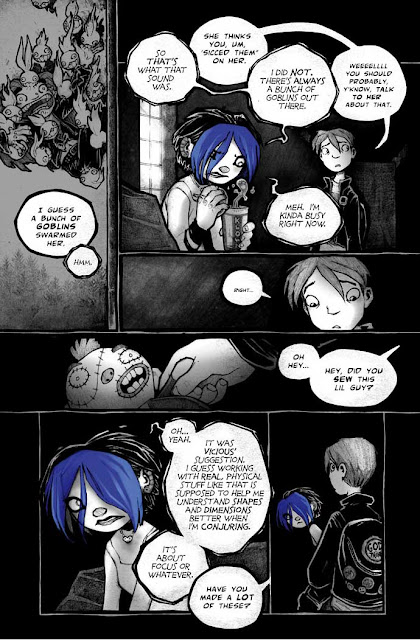 Aaron Alexovich is a comic book artist, writer, animation character designer and non-graduate of the prestigious California Institute of the Arts. Born and raised in Chicago, Aaron moved to Los Angeles to pursue a career in moving pictures, but wound up in the much more comfortable world of non-moving pictures instead. He’s worked as a character designer on Jhonen Vasquez’ Invader Zim, Avatar: The Last Airbender, hordes of TV pilots and video games, and as a comic artist on Fables, Lucifer, Disney’s Haunted Mansion, Kimmie66 and his own creator-owned horror/comedy series Serenity Rose.

Aaron’s home on the internet is www.HeartShapedSkull.com

Right now I’m just wrapping up work on a new Lovecraft-ish monster/punk series called ELDRITCH!, with artwork by Drew Rausch. I wrote it, Drew and I collaborated on the page layouts and character designs, he did all the heavy artistic lifting. We’re self-publishing it on the web as a super high-tech futuristic digital download right now, and that’s been a really interesting experience… We feel we’re really on the cutting edge with these ancient, antediluvian terrors of ours.

What other artists in your field inspire you?
Like every other artist, I could go on for like 300 pages just listing all my favorite artists. I’d say my art style comes mostly from Bill Watterson, Tim Burton, Hayao Miyazaki, and the old EC Comics guys, particularly Jack Davis. Jill Thompson, Bernie Wrightson, Dave McKean, Charles Burns, and all the classic Disney animators are all big influences, as well. I like work that has a lot of energy and emotion. Art is all about mood, I think, and these guys really know how to work a mood. I look for the same thing in writing, too. Neil Gaiman, Alan Moore, Dan Clowes, H.P. Lovecraft, Philip K. Dick, Ray Bradbury, and filmmakers like the Coen brothers, Wes Anderson and Quentin Tarantino are all really important to me. Again, it’s all about their ability to capture a specific mood. I want to get lost in a world when someone’s telling me a story. I’d rather not be aware of technique at all.

Do you work out of your home or do you have an office/studio space?
I work at home. In fact, I work in my living room. I really like working from my own home, but a couple extra walls would be nice!

I’m starting in on Volume 3 of my Serenity Rose series right now. It’s a series I started on the web way back in 2002, about a massively social-phobic witch living in a small town that survives on supernatural tourism. Kind of an occult Disneyland, I guess. It’s mostly tongue-in-cheek, but with moments of real, awful horror mixed in. It’s a really personal project to me… If I had my way, I’d spend the rest of my life building up Serenity’s little witching world.

Where do you see comics heading in the next 5 years?
More and more online, I’d say. Lots of self-published digital comics. There isn’t a huge amount of money in comics, and it seems like publishers are offering less and less as time goes by, so the incentive for artists to hand over their creative rights just isn’t there anymore. Even properly promoting a new artist’s work seems out of most publishers’ range these days. It’s sort of a cliche to say so, but the internet really has changed the whole landscape. If, as an artist, you can get your own personal, creator-owned work out to hundreds of thousands – even millions – of people without ever signing a contract… that certainly has a lot of appeal. I think you’re going to see more and more artists striking out on their own as digital publishing continues to expand and devour the earth. Terrifying and exciting at the same time! 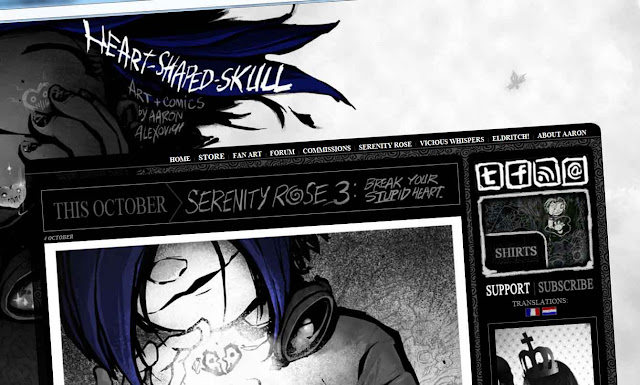