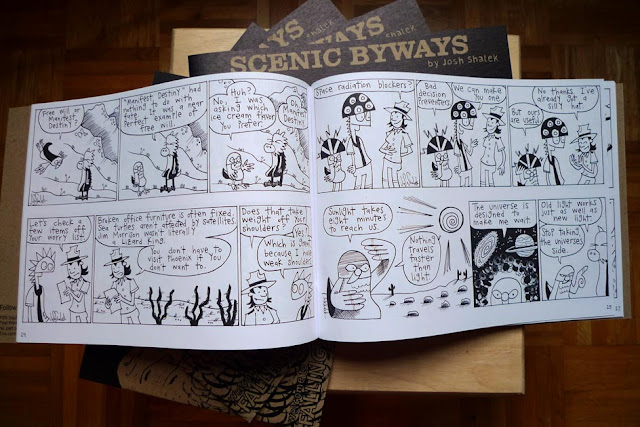 I grew up in Tucson, Arizona. The desert continues to influence my work. I drew comic strips for my high school and college newspapers and my first daily comic for The Colorado Daily in Boulder, Colorado. I’ve been drawing the daily comic Welcome to Falling Rock National Park for the past five years, which is distributed to college newspapers by the McClatchy-Tribune Campus wire service. In 2009 I was a semi-finalist for Universal Press Syndicate’s Comic Strip Superstar contest. I self-publish Falling Rock book collections and can be found at comic conventions when I’m not at home in Portland, Oregon.

Doing a daily comic strip for nine months out of the year really takes up most of my time. Welcome to Falling Rock National Park is something I hope to continue drawing for many years to come. I’m glad I have the outlet for a daily strip, but also glad I have the summers off to work on other projects. I’ve made two foldy comics and am currently working on a story about zombies – at under 100 pages, I’m calling it a graphic novella.

Bill Watterson is the first and foremost. Calvin and Hobbes continues to inspire so much of what I do, both in terms of character and art. Richard Thompson does Cul de Sac, which is one of the great comic strips of all time. James Kochalka’s diary comic American Elf is funny, poignant, and beautifully drawn. Keith Knight’s many comics are so full of energy and ideas, and he also sets a great example of the self-publisher making it into the bigger world of syndication. In this weird subculture of minicomics and zines, my friends and convention comrades Kenan Rubenstein, Reid Psaltis, Neil Brideau and Matt Ocasio are essential.

Right now my drawing board and computer are in our bedroom, but we’ll be moving soon so I’ll have a whole room to myself. I’ve never had a studio but could see getting one in the future. Whenever I visit friends who have studios I can see how much sense it makes – getting out of the house and getting work done, it’s like Starbucks without the three drink minimum.

My book about zombies is almost all inked. It will be the longest single story I’ve ever drawn, double the length of Dancing With Jack Ketch (a pirate story I did a few years back). There are so many zombie stories, I wanted to see what I could bring to the proverbial table. These are not evil zombies, and the story does not take place in a post-apocalyptic world. Here’s hoping people like it.

More online, more conventions, more small press and self-published books. Newspapers seem to be cutting themselves out of the loop, in terms of comics. I’d be interested to see if the remaining comic strip syndicates would simply run a comic strip on the web and periodically publish book collections. This is what many of us do now already on our own, but not very many cartoonists are good entrepreneurs (myself included). I love the comic strip form and can’t imagine a world without it. They have been such an indelible part of our culture for the past 100 years; what would it mean if they just ceased to exist? Comic strips have to find a new home, and I think that will be on the internet and on the bookshelves next to graphic novels.

For more info and artwork check out joshshalek.com