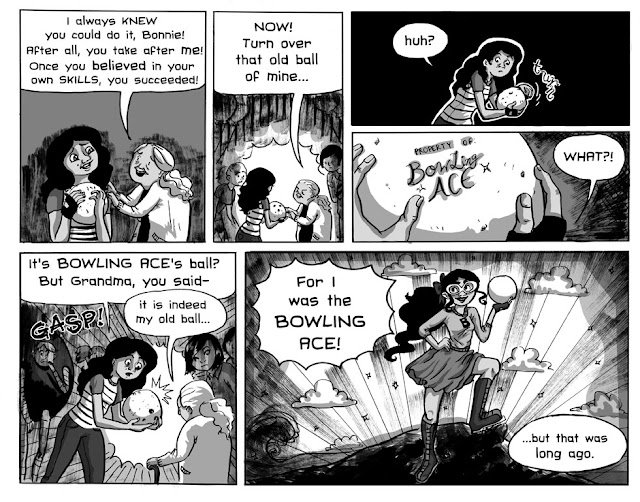 I’m from New Jersey, and I’ll graduating from the School of Visual Arts this May. I’ve been working on posting short stories (well, compared to a graphic novel , 30-something pages is short. To me it seems pretty long right now) online at www.megan-brennan.com. Besides comics, I’m also interested in children’s book illustration.

I’m currently in the middle of working on a comic story called ‘The Egg’ that’s also posting right now at my website. It’s basically about a girl who wants to befriend a bizarre cat-monster, but runs into trouble when she can’t understand it so she ends up seeking out the help of an animal psychic. I’m planning to continue to post stories within this ‘universe’ of characters after this story is over.

I’m also working on illustrations for a hypothetical children’s book I began in a class this year. It’s funny how comics and children’s books have so much in common (both tell a narrative through words and pictures) but are also so different in rhythm and what each image or panel needs visually.

Oh man, I keep writing too much for this question!

Right now I’m very inspired by creators like Yuko Ota and Anath Panagariya and Kate Beaton, who do comics online but also work in print, and branch out into multiple areas. I think that’s an important thing to do now, as the comics field is changing.

I’ve also been interning with Raina Telgemeier and Dave Roman, and seeing how they work and all the little things that have to get done when putting together a graphic novel is really helpful and inspiring. They really love what they do, and it’s clear that that is incredibly important in making comics.
Growing up I was really inspired by Charles Schulz and a ton of different manga and webcomic titles, and as I’ve been learning more about comics in school I’ve been inspired by Windsor McKay, Chris Ware, David B and a lot of other genius comic artists.

I’m also continually in awe of Calvin and Hobbes. It’s pretty much perfect.

I work in my apartment right now, and in the facilities at my school. After graduation I’ll be back to only working at home.
What upcoming projects are you most excited about and why?

I’m excited to keep working on my webcomic! I was an avid reader of webcomics when I was younger, and I’m excited to be actually making comics I’m proud of and getting them online consistently at this point.

Where do you see comics heading in the next 5 years?
I’m not so sure about what Marvel and DC will be doing, but I think print comics in general will still exist/do alright.

I hope webcomics will gain more serious recognition; so many people (even people who don’t usually read comics) read them, but they don’t get anywhere near as much critical recognition as print comics, which is a shame, since there are so many talented people doing great things in webcomics. I’d also love to see more experimentation with the way that webcomics are presented; I’ve seen a handful of great comics that really utilize the scrolling of the screen and stuff like that, and I sometimes think it gets too gimmick-y, and it’s something I’m guilty of not thinking that much about, but I think it’s worth exploring.

As for digitally downloaded comics, I’m slightly skeptical, just because I love physical books, and people are so used to digital things being free (webcomics and pirated manga, for example) but once tablets become more popular/afforable, I’m sure comics will be sold that way in increasing numbers.