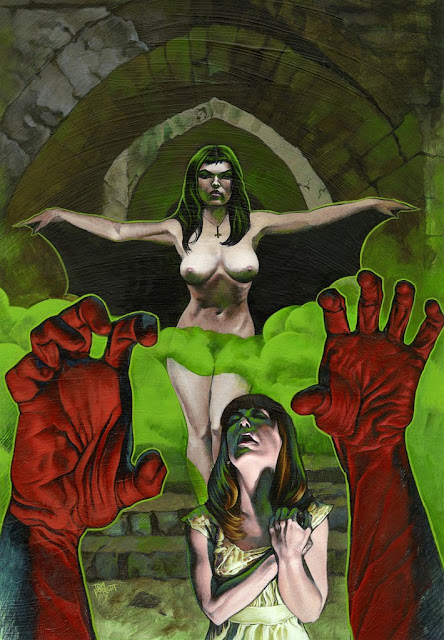 Tom Forget. Originally from Rhode Island but in Brooklyn since September 2000. Currently punching the clock at HarperCollins Publishers designing jackets and interiors for teen and young adult novels. No awards to speak of since High School when they put my name on a plaque for having the highest English average. When not making a living making books look “like Twilight,” I’m illustrating, designing, and writing for a number of people, most recently contributing a pulse-accelerating pinup to the back of the third issue of Archaia’s FEEDING GROUND. My site is tomforget.com, and I also mastermind two truly moronic blogs: gazelle family netflix reviews (I’m Tommy Gazelle, http://gazellefamily.tumblr.com/), and Shivered Clay Killing, a conceptual art project where I discuss public restrooms (http://shiveredclaykilling.tumblr.com/). In addition, I co-founded MAMMAL magazine (mammalmag.com), which I also edit and co-art direct.

No comics work happening right now, but I’m constantly working on personal projects aimed at galleries. I work in ballpoint pen on found pieces of wood that have layers of age on them. I sand away or add to the textures, then draw over that once the ground is properly prepared. I’m heavily influenced by Pushead’s heavy metal t-shirt aesthetic. Up next I’m going to be trying to figure out a way to integrate lighting and frosted glass. Could be a disaster. My other new project is my public bathroom blog, which acts as a meta commentary on personal blogs. I don’t really give away personal details, but shat I say about public bathrooms will gradually sketch out my persona for people over time. It’s kind of an “oblique self-portrait” using a reference point everyone can relate to. I am also constantly open to doing work in my more traditional crime/noir painting style, which is directly descended from pulp paperback covers.

Ugh. Too many to list, but, in no order, rhyme or reason (many of these cats are not in my field but mean more to me than those who are – – in fact, when it comes to book cover design, I know few people’s names):

Yeah – all of my personal work is done at home. I don’t need much more space to paint and draw, though with some of the ideas I’m working on, it will probably help me to work out of my parents’ basement, as they have a full wood shop and I’m sort of branching out into 3-dimensions.

Upcoming projects I’m excited about include a larger piece I’m starting to sketch out that involves frosted glass and LED lighting. I have no idea how it’s going to shake out but I’ve known for a while I wanted to integrate frosted glass into my work. I’m also going to be talking to my co-conspirators about the fourth issue of MAMMAL, which if we go ahead and make it will include a hallucinatory comic I want to do about a woman who has sex with a demon in exchange for fame. It’s inspired by a Serpieri comic I read over my friend’s shoulder that kind of blew my mind. I was really into Dash Shaw’s Spider-Man story in STRANGE TALES 2 and want to try my hand at that kind of non-traditional comic page design. We’ll see!

I think the ipad is going to start to have an effect. That and pdf format comics you can download at home. I don’t think they’ll bite into the market a huge amount at first, but eventually they’ll make an impact. I think people are going to be making as many or more comics than they ever have, but the traditional model of putting out a monthly periodical on bound paper is going to be less and less of the norm. I also expect people are going to be using social networking and technology to publish and publicize a lot more of their own stuff and bypassing the traditional methods of getting books out there. If creators have the freedom to avoid printing presses and distribution networks by outputting their work directly to pdf and websites, there might be an explosion of weird independent voices (as well as a fair bit of dreck.) It has the potential to be like the music industry – – it’s not dying, just taking strange new forms. I think comics could be headed that way.