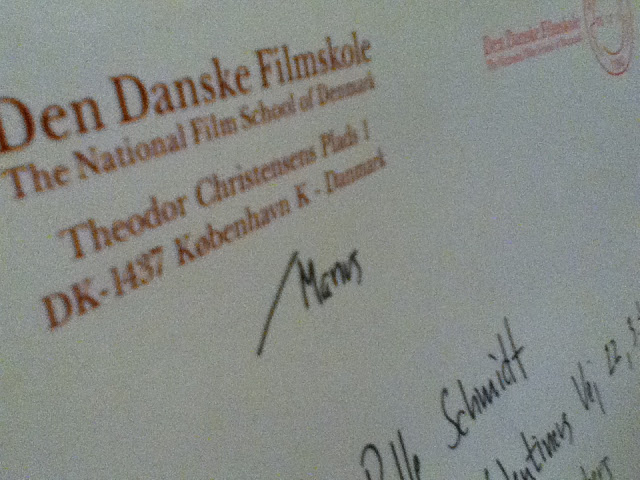 Today I began my new life as a student at the National Film School of Denmark, where I will be spending a week out of every month studying screenwriting in an exclusive 6-person Master Class ending in December of this year. The goal is to produce a feature length script while learning about the craft and business of screenwriting.

Our teachers introduced us to the school and some of the methods taught there. One was the Hollywood versus the Polish version of your script, where you write to alternative versions of your screenplay; One a cheesy, over-the-top happy-ending version, the other a drab, dreary and depressing version, supposedly made to be filmed in Poland. Which of course ends badly. The idea is to free yourself from the pressure of writing the PERFECT version, and then later pillage from your own purposefully bad versions in order to gain insight and ideas you never would have put in your “right” script. The method reminded me of what I often do when making comics, where I sketch on scraps of paper or crappy printed-outs instead of on the board, where anything less than perfect tends to scream in my face.

The day ended with us meeting the script consultant who’ll be following our individual progress throughout the year. Luckily my guy liked the pitch I gave and had some really helpful input.

I’m really excited about this course and looking forward to the rest of the week. If art posts are few and far between these days, well, now you know why.