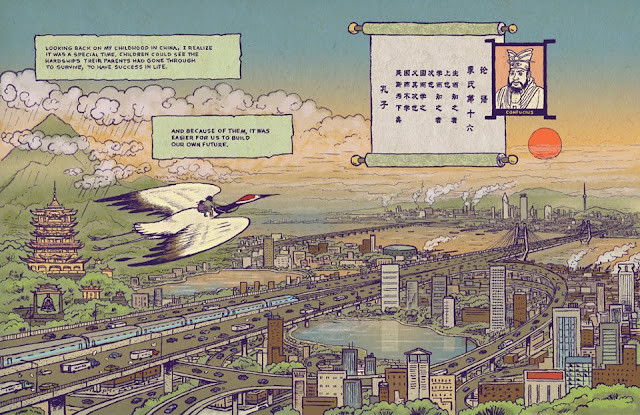 I was born in a small west Texas town called Lamesa. It’s a dismal little hot spot on the planet with tumble weeds, red dirt, and a sprinkling of oil wells. I grew up in Austin though, great city. If you haven’t been, you should visit. I left Austin and got a bachelor’s degree in painting from the School of the Art Institute of Chicago. Much Later, I went to the School of Visual Arts Graduate Illustration program in New York City. After getting schooled in the business, I got my first job from the New York Times. I illustrated about twenty pieces for their Op-ed Section. I then got my first comic book job illustrating a children’s graphic novel for Scholastic. A year or so ago, I was hired to illustrate a motion comic for the Showtime TV show Dexter. I recently wrapped a comic about 17th century Brooklyn. It was funded through a grant. Right now, I’m working on a graphic novel titled, Little White Duck. It is being co-written with my wife. It’s about her childhood experience in Mainland China from the late 70’s to early 80’s. Little White Duck will be published by Lerner/Graphic Universe. It will be about 120 pages, in full color and should be in book stores Spring of 2012.

Little White Duck is my first full length, color graphic novel that I am illustrating as well as co-authoring with my wife, Na Liu.

The book tells seven short stories of my wife’s childhood. She grew up in mainland China during the late seventies and early eighties.

China was closed to most of the world at that time, so having an inside look at her childhood is a unique opportunity. The stories are surprisingly funny, informative, and heartbreaking at times. I’m very excited to get these stories out into the public. It’s been very fun putting it together. It will be published by Lerner/Graphic Universe and should be in book stores Spring of 2012.

I also am a contributor to the award winning comic anthology Rabid Rabbit. The book comes out every three months or so, It is loaded with great talent and it allows me to experiment and grow as a cartoonist.

I work from a great studio from home. I took over most of the living room.

One interview about Fist of the Dracula which I’m putting together with Vito Delsante. A preview can bee seen here
http://robot6.comicbookresources.com/2010/08/vito-delsante-and-andres-vera-martinez-talk-about-pitching-fist-of-dracula/
Another project is in development with writer, Charles Soule. Charles just wrapped up a hot selling series at Image called 27.

I’m involved in another great project that may be released next year for either BOOM! Studios or Dark Horse. It will be written by Gabe Soria who has done work for First Second. This one could be a huge since we have some famous musical talent on board to promote the book.

I am also working on a personal project which will slowly take form in between jobs that pay upfront.

David Mazzuccelli told me once that he has seen comic booms and fads come and go in his 30 plus years in the business. He advised to just keep telling stories and stay focused on what you love to do. With the digital age and how easy it is to read comics on an iPad, the future is looking good for comics despite the latest dip in the market. I guess I’ll take David’s advice and just keep telling the best stories I can and things will work themselves out.