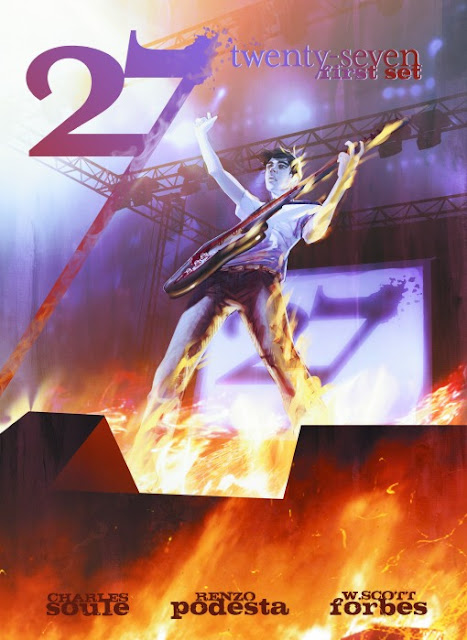 I am a Brooklyn, NY-based writer of comics, graphic novels, books with words and pictures… whatever you want to call them. My most well-known titles are the Strongman series published by SLG Publishing, and the series 27, published by Image Comics/Shadowline. You can find more information about these and other works-in-progress here: http://charlessoule.wordpress.com/ , and I’m also reachable on Facebook and Twitter (@charlessoule).

At the moment, I’m completing the last bits of work on Strongman Vol. 2: Oaxaca Tapout, the sequel to my 2009 graphic novel Strongman. It’s a fantastic action/crime story starring a washed-up old luchador (masked Mexican wrestler), which will hit shelves the first week of August, 2011. In addition, I’m working on the second volume of 27, which we’re calling “Second Set.” It continues the story we began in the First Set – a fun, creepy journey through the rock and roll myth that certain brilliantly talented musicians die at age twenty-seven. Finally, I have another graphic novel project that’s being drawn as we speak. It hasn’t been formally announced yet, so I can’t provide the title, but it’s a story based in and about New York City, particularly the amazingly complex web of systems that keep the city running (sounds thrilling, no?) It’s a neat story that I’m proud of, and I can’t wait to see it completed. It’s scheduled for June 2012, and it’s coming out from a publisher I’m very excited to be working with.

As a writer myself, I tend to gravitate towards the writer side of the comics equation, whether seeking inspiration or just plain entertainment. I find Garth Ennis to be particularly brilliant – he mixes the profane with the pure in a way I find to be very affecting. Brian K. Vaughan. Neil Gaiman. Alan Moore. As far as newer writers go, I think Fred Van Lente is fantastic, and Josh Fialkov. There are so many amazing talents in comics, though – it’s very difficult to pick just a few.

Both. I also like to write in places that aren’t “my” space, per se, such as libraries, parks, bars, and so on. I do all of my first drafts in longhand, in notebooks I dedicate to one book at a time. (So, there’s a Strongman book, and a 27 book, and others for each of my projects.) Because I work that way, I’m not quite so tied to the computer all the time, which I really enjoy. Also, writing in longhand for the first pass means I get a chance to do an on-the-fly edit as I’m typing the handwritten draft into my laptop. It’s not the best process, perhaps, but it’s mine, and it works for me.

What I am really most excited about is that I don’t just have one upcoming project on the way, I have three, all from great publishers who will support my work in a real way. Beyond those, I have other stories in the works that I am hopeful will also find good homes. It’s hard to express how gratifying it is to be able to get stories out into the world. I’ve been working to get to this point for years; I hope it continues, but even if not it’s still a dream come true.

I think we’ll see more in the digital realm, of course. I think we’ll start to see more comics designed specifically for the digital space, without a print component at all. They may become more interactive, with elements of films and games incorporated to create something entirely new. I would love to see a digital revolution that really brings comics back into mainstream entertainment in a way that’s beyond just comic book-based movies. Millions of kids should be downloading comics into their devices (and paying for them, hopefully), and I hope that appears. Creator-owned books shouldn’t have to be a labor of love for their creators, as they so often seem to be these days. There should be a realistic chance of making a good living from being a comics creator. Hmm… this answer turned into my wishlist for the next five years rather than predictions I think will actually take place – but I do believe digital is going to get bigger and bigger. It’s hard to imagine it working any other way.