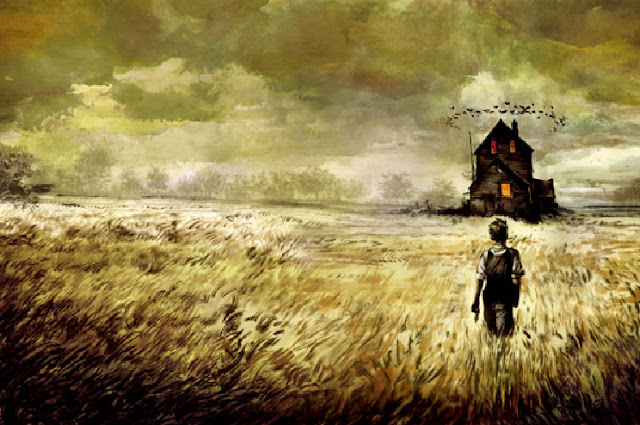 Greg Ruth was Born in Texas and lived there through high school before coming up to Brooklyn to attend Pratt. He was originally on track there to be an architect, then switched over to fine arts to be a painter, but always nurtured a growing love for comics, so despite then working as an artist’s assistant to two well known painters in NY,  he began actively pursuing comics as a career dong some stories for DC/Paradox’ factoid book series, and his own first original graphic novel that was published by Caliber, called SUDDEN GRAVITY.
His website is www.gregthings.com
Twitter is: @gregruth
and the 52 Weeks Project Kickstarter is happening here: http://www.kickstarter.com/projects/646222525/the-52-weeks-project

What comics or art projects are you working on right now?
I’m just wrapping up the final design work for the forthcoming artbook from ASFA, The 52 WEEKS PROJECT, a large scale graphic novel for Scholastic/Graphix! entitled THE LOST BOY, a second volume in the Harper Collins series of Jack London adventures entitled THE SECRET JOURNEYS OF JACK LONDON : THE SEA WOLVES, a childrens picture book from Hyperion set in China during the cultural revolution called RED KITE, BLUE KITE, and gearing up for the sequel to A PIRATES GUIDE TO FIRST GRADE for Feiwel&Friends/Macmillan. I’m also working with Ethan Hawke right now on adapting a story he crafted about the Apache wars into a graphic novel we’re shopping around this spring, a serialized app format for an ongoing long form narrative with my friend and old editor of the Matrix comics, Spencer Lamm, as well as several other children’s picture books including one I’ve written myself called tentatively, THE RED SCARF.

What other artists in your field inspire you?
I love Tony Millionaire- especially his latest Billy Hazelnuts book. I like Toby Cypress’ work a great deal and in that vein I very much like Frank Quitely. I think Guy Davis’ work of late continues to blow my mind. I don’t read as many comics as I used to. One of the dirty little secrets if that when you start working in comics, you stop reading them. I don’t know why that is, but I was warned about it years ago and it’s turned out to be absolutely right. I read a great deal more back when I was just discovering the medium, and that was an especially influential time- and a particularly dense time for good books: Watchmen, V for Vendetta, Dark Knight Returns, Martha Washington, Hardboiled, Doom Patrol, Animal Man, Sandman, Hellblazer, Akira, Mai, Love Wolf and Cub, Blood, Violent Cases… these were all just coming out each week back in the late 1980’s so every wednesday brought new wonders. We haven’t had a time like that since.

Do you work out of your home or do you have an office/studio space?
Sort of both. I live in an old victorian place in town that was built by the then town doctor, and I have set up a studio in the old apothecary building that’s at the end of the driveway here. It helps me to have the studio cathartically outside of my workspace so as I come and go there’s a mental divide between the two. It’s hard enough to keep your work separate from your home life as a freelancer, but especially so for me.

What upcoming projects are you most excited about and why?
I’m pretty excited about them all to be honest- not one of them is a project that I didn’t want to do for it’s own merits. But that said, hands down over all is THE LOST BOY. I’ve been developing that story for over a decade now, and drawing it for many years- it’s my personal project and as such is the most meaningful and most anticipated. This is my baby even beyond the 52 Weeks book- which I think comes in as a close second. WIth 52 Weeks I am doing it all, so being able to shape an entire book entirely from my own perspective and desires is quite a wonderful experience.

Where do you see comics heading in the next 5 years?
Somewhere we can’t see yet. Comics is an industry that’s always in a state of crisis, but lately it really has been more severe than ever. There’s real tectonic shifts going on and while there’s a lot of different new opportunities, the old model of how it all has worked is dead or dying, so it’s really a disruptive time. That means good people are losing their jobs, good books are getting killed, but new shoots and venues are beginning to open up. I think digital or ipad type comics are a new and exciting place, and It’s great to see book publishers starting to earnestly put out graphic novels. But in five years I think we’ll see the death of the paper form periodic pamphlet comic in lieu of a digital thing that then becomes a collected GN. Serialized monthly or weekly publication is fading fast, and I think it’s less and less evident that comics will continue in that mode.