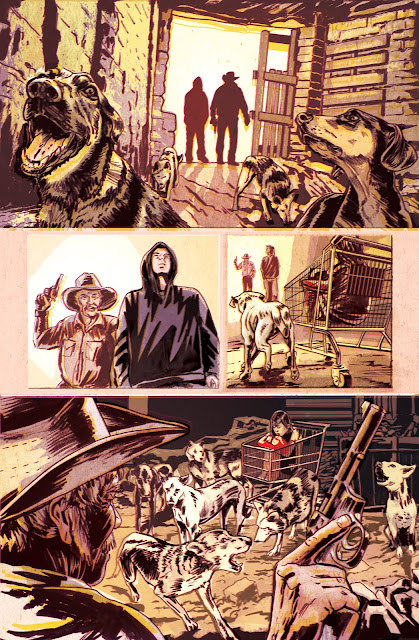 Born and raised and now back in Bayonne, New Jersey, Michael Lapinski lived in Brooklyn for the last 10 years and worked as a digital designer and painter in the NYC animation industry on such notable programs as Disney’s “Doug,” “Blues Clues” and “Team UmiZoomi” for Nick Jr., and 4Kids’ “Teenage Mutant Ninja Turtles.” A freelance illustrator and designer, and lifelong comic fan, “Feeding Ground” is his first professional comic work.

I’m currently holed up working to finish the sixth and final issue of the FEEDING GROUND horror mini-series where I serve as co-creator, penciler, inker, color artist, and cover artist. I’m an animation designer by trade so I am also developing art for a TV series pitch for pre-schoolers. There are days when I am illustrating gore with one hand and designing hair styles for children with the other.

Right now, I think that RM Guera on SCALPED is the guy whose work is simultaneously fluid and considered, raw and accurate. He literally inspired me by looking at my work at a Con and encouraging me to loosen up and “Let it flow.” In the past, the distilled naturalism of Dave Mazzuchelli’s BATMAN and DAREDEVIL work and Bill Sienkiewicz’s cinematic expressionism on THE NEW MUTANTS spoke volumes and still loom large for me. Otherwise, we are very lucky as comic fans and creators to be working in an era of such a high standard of craft in service of Story. Every day I see something new that fires my synapses, excites my eye, and pushes me to excel. Any of the guys on the Comic Twart site are a good example as are illustrators like Olly Moss and Homer Tenuka and comic artists like Paolo Rivera, Jason Latour, Becky Cloonan, and Jerome Opeña (among many others). And, working with Archaia Entertainment, the talent of my peers and the quality production of their product are a high bar to strive for.

I’m housed in my home office with my drafting table and computer desk. It doubles as our guest room and den for our dog and cat. I’m a social person by nature and I do miss the team aspect to working in an animation studio. Podcasts (The Tobolosky Files, The Ink Panthers Show, Word Balloon, Why I Love Comics) and pets have kept me company for the last year and a half on this book.

Once we finish this issue, we will take time to realize FEEDING GROUND as a complete, definitive, story in the Hardcover edition due out in time for San Diego Comic Con at the end of the Summer. We’ll have a chance to comb through and do any story and art fixes gleaned from the steep learning curve of working on our first comic book. After that, I’m really looking forward to the release of a short strip I did for the band Americans UK in their ROCKTRONIC MIX-TAPE VOL.2 anthology and another collaboration with Swifty on a 2-page horror story in THE GATHERING anthology.

If the short answer is “online and mobile” then creators need to also re-think what it means to tell a story in this new format. Within the next five years I do think we’ll see the first real foray into an integrated platform that is financially viable, creatively fulfilling, and fosters the same fan community that already exists in comics and in almost no other medium. On the flip side, I think that Archaia is a company that wisely prints books that are in and of themselves quality objects. The comic as book will continue to be viable but in a package that values the time, money, and shelf space of the reader.