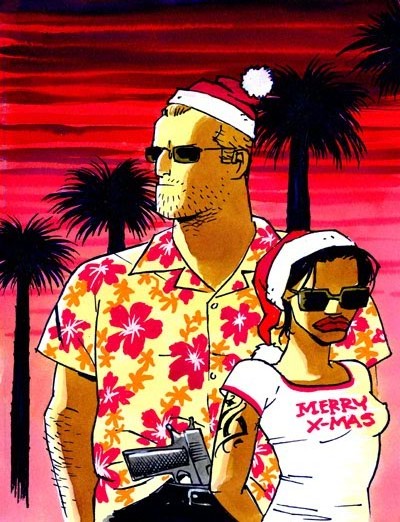 The time has come for a final post before the holidays bogs everything down. In a good way, right? Right…

This year was very exciting for me as I focused a lot on my own projects and had my first US graphic novel out in May. I was fortunate enough to have three visits to the US, spending the entire month of July in California with my wife and two daughters. I will be carrying the sound of the ocean and the majestic calm of Big Sur in my heart for a long time, just as I will always remember the sounds and smells of New York City and the friends I made there, visiting the MoCCA Festival in April and NYCC in October while having the privilege to work out of Hang Dai Studios in Brooklyn.

Not everything went according to plan; some projects got pushed ahead while new opportunities arose, some things just didn’t happen. Like the Christmas card I was supposed to send out (the above motive is an old one. Sorry). But 2011 feels like the year I finally found myself – at the age of 39. One of my new friends introduced me as “Danish noir artist Palle Schmidt”. That makes me feel very proud, since I don’t think anyone in the history of Man has ever been called that before!

Next year I’ll be studying screenwriting at the National Film School of Denmark a week out of every month, and I’ll be working on at least two new comics projects with US writers besides my own graphic novels. I will also be contributing to a couple of new web sites; Trip City and Making Comics, just as I’ll be continuing to update my own site.

I want to thank you all for your support, for dropping by, for commenting and contributing. I wish you a Merry Christmas and a Happy New Year. See you on the other side.