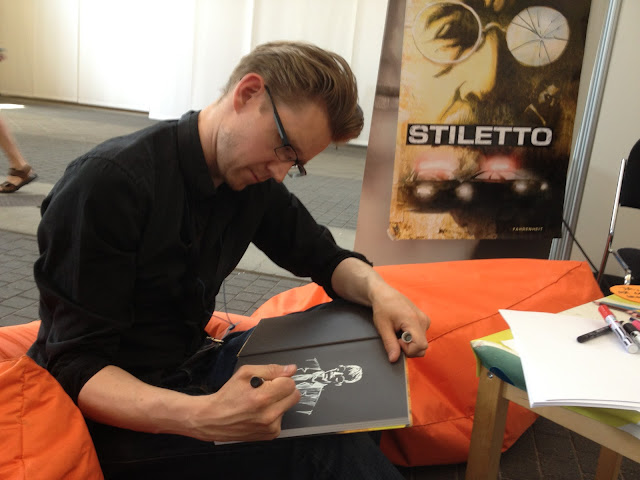 Back at the office after a buzzing two days at the Danish comics event of the year, Copenhagen Comics.

I didn’t do any blogging during the convention itself, I simply didn’t have the time. If I wasn’t talking to people, I was signing or drawing as part of the program, and both Friday and Saturday night I was busy drinking.

Friday was a sort of VIP dinner, although most of the crowd were old friends in the small and cozy Danish comics scene. I didn’t have a chance to talk to any of the International guests that night, but the following days I chatted with both Jaime Hernandez and Brian Azzarello, who remembered me from Angouleme. Usually I’m not that starstruck, because I’m really not that knowledgeable about who’s who in comics. But both Hernandez and Azzarello I’ve been a fan of forever, so I hope I didn’t make too much of an ass of myself.

My new book STILETTO was a huge success, outselling at the publisher’s stand during my hectic signing there on Sunday. Who knew there was such a market for crime comics in Denmark? I can’t really think of anyone other than me making them, so I’ve cornered that market.

It was great to be able to present this work that’s been ruminating in my brain for at least 8 years and I’ve worked on (and off) for maybe 4 years, from beginning the script to finished hardcover book. It’s a beauty. I’m very proud of this book, hopefully an English language edition will see the light of day soon!

I also got a lot of attention on the Comics For Beginners videos that I ran at the booth. Selling and signing STILETTO kept me more than occupied during the weekend, but we did get a bunch of subscribers for the newsletter and a lot of positive feedback on the idea.

For me the idea crystalized, as I was explaining the thoughts behind it to somebody at my table. It’s not so much a this-is-how-you-draw tutorial as much as a guide to getting to the finish line. And a lot of that is psychology, not craft.

As comics creators, we are our own worst enemy. We have to somehow trick ourselves into believing we can do it, that it’s easy. If you want to know more, sign up for the newsletter. It’s not spammy, and I really do believe we provide some value for people struggling to write, draw and create.

I just wanted to let you know that I am still alive after a hectic weekend. I had a blast. Hopefully we’ll see some reviews of STILETTO in the upcoming weeks. If you were one of the many who bought the book at Copenhagen Comics or your local retailer, I’d love to hear your opinion too.

Thanks all of you for your support.