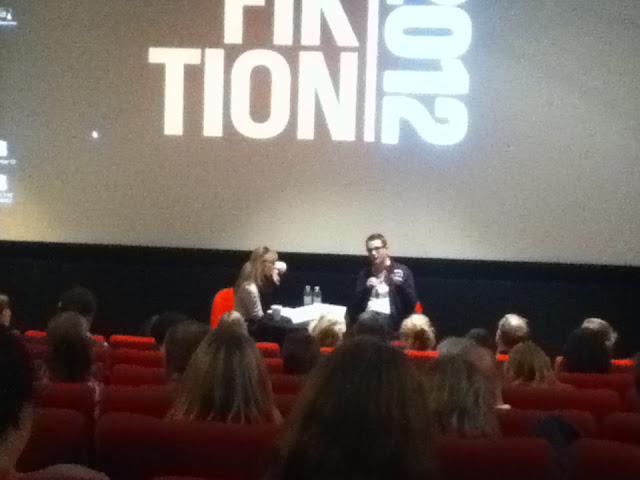 I attended the annual(?) Fiction Day at the Danish Film Institute (DFI) yesterday. A long, exhausting day of panels, discussions and talks from some of the people who call the shots in Danish film. As you may know, the arts are heavily subsidized in Denmark, making it almost impossible to get funding for a movie unless you can persuade DFI that it’s a good idea. So hoping gain some insight in how all this works I went, with an open mind and not many expectations.

The theme of the day was “audience”, what they want, how to meet them, the value of screenings etc. I saw clips from upcoming movies, learnt a bit about the different funding systems and chatted with old friends and new contacts. There were some interesting discussions about movies for the Young Adult audience and a meet & greet with a panel of average moviegoers.

director Nicholas Winding Refn, where he talked about his working methods and his experiences in the movie business – both in Denmark and abroad. I even got to ask him about his crime fascination (of which he claimed he had none) at the Q&A afterwards. I was excited to learn about his next movie Only God Forgives, that he just finished filming in Thailand and that he is set to direct a remake of the 70’s scifi Logan’s Run – both with Ryan Gosling on board.

The day ended with a screening of Thomas Vinterberg‘s latest movie Jagten/The Hunt, a return to familiar territory for the director who broke in with Festen/The Celebration

in 1998. The Hunt was a moody, claustrophic and deeply depressing movie, about a Kindergarten teacher who is accused of sexually abusing a young girl. While the story certainly had relevance, it failed to convince me entirely. The reactions of the characters seemed contrived, the protagonist too inactive, and the opportunity to create suspense (did he do it?) was sadly missed. Excellent acting aside, I will not be recommending The Hunt, unless you like to see innocent people being harrased while all their friends turn against them for no good reason.