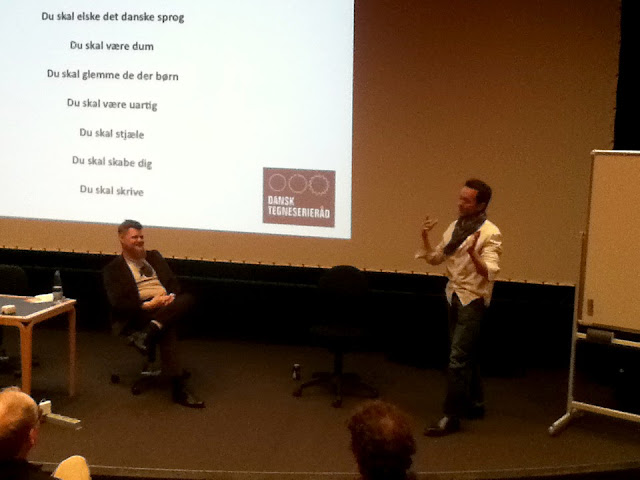 Boost of energy last night with the general assembly of Dansk Tegneserieråd, the Danish Comics Council, held in the Danish Film School. Here, ex-cartoonist Kim Fupz Åkeson talks about his ten commandments for writing professionally. Åkeson is known for his work in children’s books and has been working as a screenwriter since 1997, establishing himself with the screenplay Susanne Bier’s hit romantic comedy “The One and Only“, while continuing to put out great books in his own name, like the fantastic “Vitello” series. Interviewer is Benni Bødker, Danish writer and comics reviewer.

The board of Danish Comics Council gave out free copies of a yearbook containing information about every published comic and graphic novel in Danish in 2010 and talked about their work trying to promote sequential art as an established artform. News of a possible official comics education, planned as part of The Animation Workshop in Viborg, and talk of the opportunities for a museum of comic book art, and the upcoming Komiks.dk festival, which has unfortunately been pushed to 2013, now part of the Council’s responsibility. While the members of the board are more or less all involved with the comics site Nummer 9, this site is tecnically independent of the Council, but a great site on comics nonetheless. The next couple of years are looking very exciting, as the Danish Comics Association is on the move!

You can join for a yearly fee of 200 Danish Kroner. Support the cause!