I arrived in Caroll Gardens yesterday, after an 8-hour flight and a two-hour line to get through passport controls. Got fingerprinted for the third time this year coming into the States. Seems the whole charade is just a way to slow down the process of entering the country, as they don’t even keep it on file. A speedy taxi drive from Newark airport, the warm winds and smell of fried onions wafting through the open window. When I checked my email I had a party invitation and two people welcoming me to New York. Thanks, guys.

Just had time to throw my bags on the bed and a quick shower before rushing to the screening of  Bored To Death Season 3 premiere at a local bookstore, hosted by HBO and writer/creator Jonathan Ames. Dean Haspiel won an Emmy for the animated intro and also works as a consultant on the show, and is the founder of Hang Dai Studios here in Brooklyn, the place we’re I will be hanging out for the next week or so. It was a fun night, meeting people and drinking and several bars. Got to bed a little later than usual.

I’m up now, and enjoying the sun on this little patio, listening to distant traffic and sirens, birds chirping in unfamiliar voices. I got a cup of coffee and a headache, so all is as it should be. Looking forward to working out of the World’s smallest studio this week and hopefully learn a thing or two. I’ll be sure to post on this blog all the way. 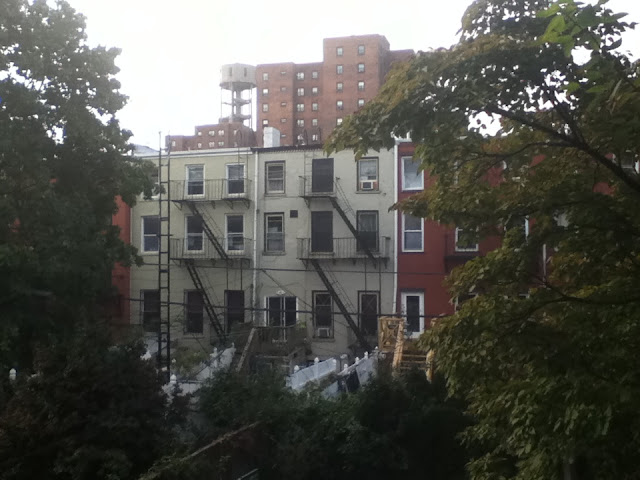 PS: In-flight movie was X-Men: First Class. Pretty good! I know I’m probably the last person on this planet to see this, but still. I recommend it, good fun, great cast.