Some time in the early Nineties, I was involved in a grandiose project of making a generic role-playing game for the Danish market. Somewhere between 20 and 30 writers participated in what was supposed to be three books; a rule book (“Vision”), a fantasy book and a near-future one (working title “Fusion”). I was – and still am – a huge fan of “Blade Runner” and loved the prospect of making an investigation game set in a dark future. My co-writer Malik Hyltoft insisted we set it in Copenhagen, and we started doing research and reading crime stories, while others shook their heads at the setting. Copenhagen was just not noir enough and Danish crime was pitifully non-dramatic. Until then, any contemporary setting had to be America, and any other setting had to be fantasy. Our Danish detective game was a joke.

The ambitious “Vision” project started falling apart after a year or two, due to difference in opinions and egos the size of Ohio. My friend Malik Hyltoft and I were the only ones who kept going, not giving a damn what anybody thought. 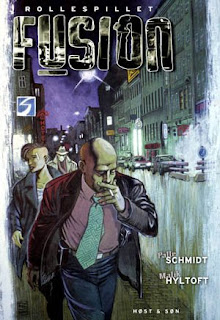 Almost ten years later FUSION finally saw the light of day, published by Høst & Søn, to whom we will forever be grateful. They took us seriously and helped RPG tremendously just by being a “real” publishing house, not an obscure underground genre publisher. We anticipated a fight, when we insisted not to have “how to play a roleplaying game” chapter in the book, but they never questioned our vision, knowing Fusion was meant for mature readers and second generation roleplayers. They backed us up as far as they could, even throwing some money into the trailer as I recall.

Despite our different approaches, Malik remains one of the best writing partners I have ever had. We understand and respect each other completely. When presented with his work, I have rarely had any objections, and I know he feels the same way. I have no idea who wrote what in the books, it just interlaced seamlessly. During all the years we wrote on and off, we were always able to focus on the story when we did get together. Within minutes, we were back in the game, and could jump in and out of sequences and storylines. Even though they were rough drafts done verbally months before, we both knew exactly what we were talking about. Malik understood and respected my mostly intuitive approach and added the mathematical elements of plot, the weight of real knowledge. I got all my ideas from TV episodes or crime novels.

I built us a zappy racecar, Malik was the one who put the engine in and made sure it worked. 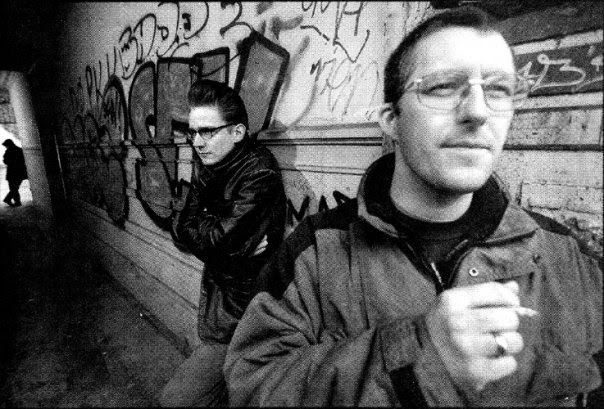 Not much Blade Runner influence remains in the books, but a few supernatural elements have snuck in. The game turned out to be more social critizism than I had expected, tackling some heavy political and moral issues as well. Perhaps one of the reasons for it’s moderate succes – I suspect roleplayers of being somewhat turned off at elements that hit too close to home. We published the last book in the series ourselves, pouring in all the money we ever made on the first two. “Fusion” is still available in some stores, and the website is still there, full of resources for a Noir Copenhagen detective game.